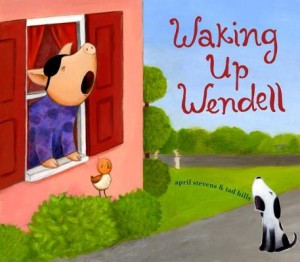 Waking Up Wendell by April Stevens and illustrated by Tad Hills

So starts the story of how a chain of events results in everyone on one street waking up. The bird’s song awakens Mr. Krudwig at #2 Fish Street, whose grumbling wakes up Leopold, his dog, who barks “RAPPITYRAPPITY-RAP RAPPITY-RAPPITY-RAP” . . . and wakes up Mrs. Musky, at #3 Fish Street. The antics go on and on until, finally, Lilah Hall’s singing in the shower at #9 awakens the last person left who is still asleep, none other than the littlest resident at #10 …