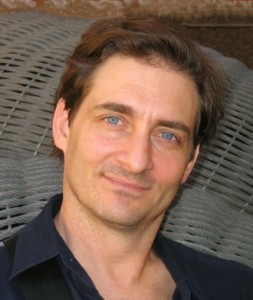 Tad Hills grew up in Norwell, Massachusetts, with a love of wildlife and nature. Surrounding his childhood home were many acres of fields and forests where he and his brother and sister would explore, build forts out of sticks and hay, and pick blueberries and grapes. His mother taught 4th-grade science for the Audubon society and often brought home animals. Raccoons, snakes, owls, and turtles were common guests in their house. His love of nature and wildlife is reflected by his favorite books from his childhood: Robert McCloskey’s Blueberries for Sal, The Biggest Bear by Lynd Ward, and chapter books by Thornton Burgess.

All of the grown-ups in his life encouraged Tad’s creativity. He spent a lot of time with his grandmother, who was also an artist. They made books, drew and painted pictures, visited galleries and museums, and sat in her garden. She encouraged Tad to look at the world from different angles. She was delighted when, instead of seeing a pansy, he saw a monkey’s face, or instead of a puddle of spilled milk, he saw an elephant. She marveled at his art and, although she was an accomplished painter, wished that she could paint like him–a notion he understands well today. “Every day I wish that I could make art with the simplicity and fearlessness that my kids do.

“My mother always encouraged my artistic endeavors. We had a playroom that was always buzzing with activity. It was never tidy for long–a reality my mother accepted after weighing the relative benefits. This is where I’d spend much of my time drawing, painting, and building and making things. I come from a long line of engineers on both sides, so my interest in making things almost feels like it could be genetic.”

As an adult Tad still makes many of the same things he made as a kid. Alongside his kids–Elinor, age 10, and Charlie, age 8–he’s made marionettes, jewelry, a tree house and Halloween costumes. “There is nothing more exciting to me than building something from nothing without a blueprint or directions. And using unlikely–and better yet recycled–materials makes it even more exciting. I really couldn’t tell you how a car engine worked but I could make a nice one out of cardboard and toothpicks.”

Tad’s interest in art drew him to Skidmore College in Saratoga Springs, New York, where he studied painting, drawing, printmaking, sculpture, creative writing, and poetry, but his greatest education came with the arrival of his children. “Spending time with my kids helps me remember what it’s like to be a child. I try to capture that innocence and enthusiastic vision of the world in my books. I want kids to see themselves in my characters.

“I find the process of creating a book similar to making sculpture. It is a constant adding and taking-away. The words and pictures are like pieces of clay. Some ideas come from experience and observation and some seem to come from thin air. Sometimes an idea builds out of an overheard conversation, or sometimes an idea comes to me when I’m cooking dinner. The real trick is to take all those ideas, like chunks of soft clay, and build something. Throughout the process the sculpture may hold itself upright, or more likely it might sag in places, or even collapse completely. The tough part is getting all that clay to stand up and not sag or collapse. Standing, of course, isn’t all there is: you have to make sure that it is fun and interesting from all angles, because kids will be walking around it, squinting at it, sniffing it, touching it–inspecting it from all sides.

“As an author and illustrator of children’s books, my greatest satisfaction comes from visiting schools. The kids’ excitement and enthusiasm for books is very real. I especially enjoy the responses I get from children when I ask if they have any questions or comments. ‘Where do you get your ideas? What’s the difference between a book and a story? My birthday is June 12th. How do you make the cover shiny? My Dad has socks like yours. Do you have an agent? Do you write the story first or draw the pictures? How do you make a book?’ But what I love most is when a lower school kid smiles and says proudly, ‘I’m writing a book.’”